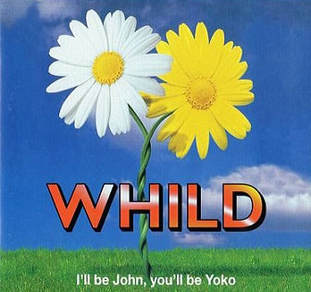 I'll Be John, You'll Be Yoko is a non-album solo single from Jim Lea under the pseudonym Whild. Released by Jet Records on 14 February 2000, it failed to make an appearance in the UK charts. The song was written and produced by Lea.

Background
Following the scrapping of Lea's solo album project in 1994, Lea chose to study psychology at college three years later. In 1998, he began writing and recording new material again, including "I'll Be John, You'll Be Yoko". Having become good friends with Karl Wallinger of World Party fame, Wallinger supported Lea in his writing, playing and working in the studio. In a 2000 interview, Lea said: "I'd gone over to Karl's after college one day and I just threw everything I knew from The Who and Hendrix into this jam. I got a real sweat up and jammed all night, which would amaze anyone who knows me, because I'm a real sleep merchant! And after that, I didn't go back to college. I knew I was a musician and that I wanted to write more songs."

Speaking to Mojo, he spoke about life after the split of Slade in 1992 and the single: "I started getting into the property business, and took a psychology course at college. After that I started writing songs again. I'd got friendly with Karl Wallinger and he inspired me to get back into music. I've done this single as Whild - which some say sounds like Oasis. There are no machines on it; my brother plays drums. There are a few bum notes in there. It's all sloshing around. Making perfect records is just making dead records. So that's where I am. I'm 50 and the clock's ticking away. It's kind of like, now or never."

As suggested by the title, the song refers to John Lennon and Yoko Ono. Speaking of Lennon, Lea said: "Success was getting Lennon nowhere. He would probably have died on dope if it wasn't for Yoko. Maybe Yoko saved his life. Certainly success won't assuage what's inside you".

In early 2000, it was revealed that Lea had over 65 songs in the can and that an album of new material was a possibility. Later in the year, the Slade International Fan Club revealed that Lea was planning to release an album in March 2001. It was also revealed that he had two albums ready for release; one "very 60's sounding" and another described as "Beatle-ish". However, Lea then had to put his musical ambitions on hold in order to help care for his father, whose health was deteriorating at the time. Lea would eventually release his debut solo album Therapy in 2007.

Release
"I'll Be John, You'll Be Yoko" was released on CD by Jet Records in the UK only. It was marketed by Trojan Sales Ltd. The single featured two additional tracks; "Megadrive" and "I Go Wild". Both were written by Lea and remain exclusive to the single. "I'll Be John, You'll Be Yoko" was later included as one of six bonus track on the 2016 vinyl release of Lea's solo album Therapy.

Promotion
On the single's release date of 14 February, the BBC's Midlands Today, Evening News broadcast an interview with Lea, filmed at his local pub the Oakley. Aside from talking about the new single, footage of Lea performing the song was also shown.